We’re pleased to feature a new book review by Masoud (Ahmad) Ariankhoo on Borderlands History blog, today! Ahmad is a Ph.D. student in Stony Brook University’s Department of History. He is interested in the history of tolerance with a focus on the Medieval Sufi traditions of Persia. He is now working on a collection of letters from a High Middle Ages Sufi master to tease out attitudes to religious plurality.

Sabri Ates’s The Ottoman-Iranian Borderlands is an extensive historical study of “an ancient interacting frontier” between two rival powers of the Middle East that only concluded “days before World War I” (1, 317). Ates centers his analysis on forgotten or neglected facets of a borderland that was constantly contested, re-imagined and reshaped by various players over several centuries. The book breaks away from the unidirectional approach of examining the center’s effects on the periphery and instead sheds light on the influence of borderlanders on those in power and the making of the border itself. 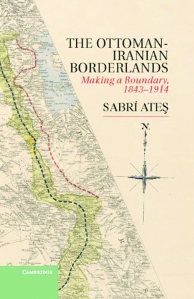 Regarding his terminology, Ates points out that he uses “borderland, border, and frontier interchangeably” which may draw critique from borderlands historians as each term holds a specific meaning all its own (8). The author, however, demonstrates that he is fully aware of these distinctions by giving priority to the term “borderland” in his description of the contested region between the Ottomans’ and Iranians’ territories. He also does not refer to borders as impenetrable barriers in which the mobility of humans is completely contained but rather believes that the process towards establishing a defined border exhibits a “decrease in the porosity of the frontier as a filter” (197). Ates’s particular approach is significant since it puts his work in line with the global trend towards a more multilateral understanding of borders and borderlands and is also one of the first scholarly works that addresses the border interactions in the Middle East through the lens of borderlands methodology

The book’s structure is praiseworthy as each section focuses on a particular contributing factor to a borderlands society. From the ethnic role of Kurdish tribes to religious dynamics in the buffer zone and even the impact of regional and international powers, Ates deftly illuminates the variety of factors and players that influenced and shaped the final structure of the political agreement between the rival powers and even the boundary itself. Throughout each chapter, Ates’s use of subsections provides mental handles that the reader can use to keep a grip on this complex and detailed study. The variety of sources significantly enhances Ates’s attempt to draw a comprehensive picture and lets the reader hear the voice of various parties to the addressed contest and even feels their agency throughout the book.

The Ottoman-Iranian Borderlands broadens the horizons of the field of Middle Eastern borderlands history and also transcends the borders of a solely academic audience. Its intellectual reach and impact could very well go beyond to political analysts, policy makers and authorities involved in territorial matters of the Middle East. In a time when ethnic and sectarian violence is on the verge of tearing many countries apart, Ates’s study could provide valuable historical context for those interested in the roots of contemporary antagonisms growing in the region. His argument that the fate of the ethnic groups was “sealed” more than a century ago by “the making of the Ottoman- Iranian boundary coupled with imperialist remaking of the Middle East” will no doubt stimulate conversations and invite readers to reevaluate the seeming suddenness of the present turmoil in the region (319).