Embracing Transnationalism and Rethinking Fundamentalisms: A Review of the Borderlands and Frontiers Studies Committee Meeting at the 130th AHA Annual Conference 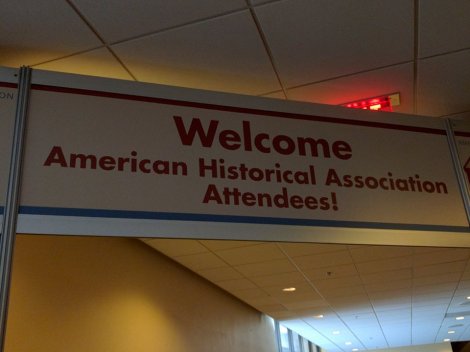 A Review of Frontiers of Borderlands History: Gender, Nation, and Empire – The Borderlands and Frontiers Studies Committee Meeting at the 130th AHA Annual Conference, Friday, January 6th in Atlanta, Georgia.

Borderlands history is the study of a particular region – the U.S.-Mexico borderlands (for most of those attending this panel) – but it also might be more broadly conceived as the study of transnational processes that transcend borders. The chair of the Borderlands and Frontiers Studies Committee Meeting, Elliot Young (Lewis and Clark College) has demonstrated in his first monograph, Caterino Garza’s Revolution on the Texas-Mexico Border (2004), that borderlands history is at once tied to a specific region, but can also transcend it, as his recent monograph, Alien Nation: Chinese Migration in the Americas from the Coolie Era Through WWII (2014) shows. Unfortunately, I missed Elliot Young’s opening remarks due to the trouble I had navigating the vertical maze of the Marriott – one of the three enormous hotels claimed by the AHA last weekend.

I arrived while Omar S. Valerio-Jiménez (University of Texas at San Antonio) was talking about both the necessity and difficulty for borderlands historians to complete research in archives on both sides of the border, something he experienced while researching his monograph, River of Hope: Forging Identity and Nation in the Rio Grande Borderlands (2012). This theme, the importance of transnational archival research, came up in each paper. In fact, two overarching and overlapping questions emerged from this panel discussion. First, how is borderlands history “transnational” and what does “transnational” mean? Second, does borderlands history challenge cultural and national “fundamentalisms” and binaries or reinforce them?

Like Omar Valerio-Jiménez, Sonia Hernández (Texas A&M University) stressed the importance of borderlands historians working in both U.S. and Mexican archives because marginalized peoples often “exist largely” in archives outside of the United States. To demonstrate this point, Hernandez described how, while conducting research in archives in Mexico for an article she recently published, she discovered a network of Anarchist-Syndicalist Mexicanas, Tejanas, and New Yorkers who produced literature about anarcho-syndicalism during this period, yet have not been recognized in the historiography of this movement.[1]

Hernández explained that “narratives change” when scholars take a transnational approach and engage in multinational archival research. One of her concerns about the field of borderlands history is that this transnational approach is not utilized enough by borderlands historians. Despite the fact that the field of U.S.-Mexico borderlands includes two nations (at least), many U.S. borderlands scholars neglect Mexican scholarship as well as the actual history on the Mexican side of the border. In a similar vein, Julia Maria Schiavone Camacho (Sarah Lawrence College) described research that looks not only at Anglo and Mexicans, but also Chinese, as she does in her monograph: Chinese Mexicans: Transpacific Migrations and the Search for a Homeland, 1910-1960 (2012).

Ramón A. Gutiérrez (University of Chicago), author of the seminal When Jesus Came the Corn Mothers Went Away: Marriage, Sexuality, and Power in New Mexico, 1500-1846 (1991), took the conversation in a provocative direction. Gutiérrez spoke about sexual and gender borderlands, exhorting us to stop being “gender fundamentalists.” He invoked Gloria Anzaldúa’s borderlands theory and her concept of los atravesados: “the squint-eyed, the perverse, the queer, the troublesome, the mongrel, the mulato, the half-breed, the half dead; in short, those who cross over, pass over, or go through the confines of ‘normal.’”[2] Gutiérrez spoke of sexual or genital borderlands and asked that instead of thinking about a strict binary of male/female or genital-based sex that we think about a more complex and fluid sexuality than gender fundamentalism allows. He spoke of how various people have “transvested the body” over time in the U.S.-Mexico borderlands, such as José Sarria, an early LGBT activist in San Francisco who regularly dressed in drag, and Latina gangs in northern California who preform a tough masculine identity but include one feminine identifier on their bodies such as painted nails or an earring.[3]

Gutiérrez’s paper provoked what I felt to be one of the most interesting comments from the audience. A lawyer and scholar who studies water rights in the borderlands commented that the promise of borderlands history and methodology is that it “challenges fundamentalisms” – gender fundamentalism as well as other kinds of “fundamentalist” formulations like nation/state and black/white. The work of scholars such as Gloria Anzaldúa, Gutiérrez, and Julia Maria Schiavone Camacho demonstrates this, as their scholarship shows the borderlands to be a place where sexual, gender, and racial boundaries are often transgressed in the formation of intimate relationships.

Elliot Young and Sonia Hernández pressed scholars to use “nationalisms strategically” and to identify what we mean when we invoke the term “transnational.” While stressing the importance of multinational archival research, Young explained that transnationalism is not merely about doing research in two or more distinct national archives and comparing it, but it is also about the kind of questions we ask and methodology we use; about looking at transnational processes and institutions. Hernández explained that it is important to examine how historical processes move back and forth across the border. This conversation brought to mind John McKiernan-González’s Fevered Measures: Public Health and Race at the Texas-Mexico Border, 1848-194, (2012) which demonstrates how the spread of disease and the efforts to contain them are transnational processes that at once disregard borders (in the case of disease) and create them (in the case of multinational, state, and local public health quarantines).

The most important takeaway from Frontiers of Borderlands History: Gender, Nation, and Empire was the importance for borderlands historians to think and work transnationally, to complete multinational archival research, address the history and the historiography on both sides of the border, and look at processes and institutions that cross borders of all kinds. By doing this, we can follow the lead of these scholars and identify the stories of those people and processes that do not fit neatly into one nation, one gender, or one race, and break patterns of fundamentalist thinking.

One thought on “Embracing Transnationalism and Rethinking Fundamentalisms: A Review of the Borderlands and Frontiers Studies Committee Meeting at the 130th AHA Annual Conference”