Summer Series: A ‘Nation of Immigrants’ at the Border 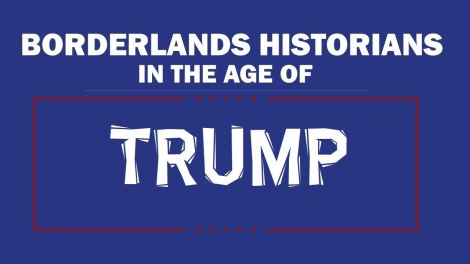 This is the last installment of our Borderlands Blog Summer Series. We’d like to thank everyone who contributed to this short, but incisive series and much love to all those who read our posts and stayed tuned over the summer.

I would be remiss if I did not mention the current atmosphere of anxiety that looms over us as we head back to work in the fall. Just last week a young woman, Heather Heyer, was killed as hundreds of anti-fascist protesters confronted white nationalists in Charlottesville, Virginia.  The night before, the University of Virginia was overrun by angry, white men wielding torches. It is not a coincidence that they sought to intimidate students and faculty on this college campus.  The university/college campus has long been a site for social upheaval, protest, and transformation.  Students have been at the forefront of political change in this country for decades, however, now higher education finds itself in the cross-hairs of a major social and political battle for the minds of the future. Thus, the task before us is greater, and potentially more dangerous than ever.

While historical distortions will continue to run rampant, we, as historians, are armed with sources, evidence, and analysis, striking out simplistic ideologies that breed desperation, hate, and violence. The Borderlands History blog will play its part in this endeavor as a space where historical analysis about the region serves to contextualize and enlighten the current political and social climate.

As many have already observed, Miller’s seemingly fine-tuned attention to chronology actually reproduced a common alt-right tactic to dismiss the poem as an irrelevant distraction.  For those who embrace the U.S.’s identity as a nation of immigrants, Miller’s comments and Trump’s support for restricting immigration – especially from non-Western countries[1] – are not only anti-immigrant, but fundamentally un-American.  As the grandfather of modern immigration history, Oscar Handlin, famously wrote in 1951, “Once I thought to write a history of the immigrants in America. Then, I discovered that the immigrants were American history.”  This statement, of course, obscures the role of Native Americans in American history.  But to the extent that the United States today is comprised of 322 million persons who are not of Native American heritage, this massive population was only possible through immigration – by colonists, capitalists, and laborers; by Europeans, Asians, Latin Americans, and Africans; and in free, coerced, and enslaved forms.  What makes the United States so great – even exceptional, in this regard – are the immigrants who have come to these shores and have helped to make this country a diverse, complicated, and, yes, hopeful place.

Still, Miller is not entirely incorrect.  Putting aside purely demographic considerations for the time being, the United States has not always been a “nation of immigrants,” at least not in spirit.  As immigration historians have been pointing out for some time now, American history has been shaped by opposition to immigration as much as by immigration itself. (For a helpful overview, see #ImmigrationSyllabus.)  Beginning with the Page Act of 1875 and the Chinese Exclusion laws, and evolving over the course of several decades into the Immigration Act of 1924 and the rise of the Border Patrol, the United States steadily expanded its federal power to regulate and restrict immigration based on race, class, and gender.

Although the Statue of Liberty is celebrated by many as a beacon of hope and Ellis Island is revered as the entry point for millions of new Americans, many turn-of-the-twentieth century immigrants arrived at Ellis Island only to be separated from family, detained in segregated quarters, and – not infrequently – denied admission and forced to return to their home countries. Angel Island, of course, served as the port of entry for hundreds of thousands of immigrants from more than 80 countries, but is most infamous for its operations as a detention center for Chinese immigrants, who were routinely targeted for extra scrutiny, subjected to a variety of invasive and humiliating inspections, held in prolonged detentions, and, in many cases, subsequently deported.

The U.S.-Mexico border provides its own unique set of historical lessons about immigration and national identity.  In many ways, immigration regulation at the U.S.-Mexico border begins with the attempt by both the United States and Mexico to police and restrict indigenous mobility in the borderlands.  Over the course of the nineteenth century, the indigenous borderlands were radically transformed, and violently so.  Fusing colonization programs with Indian removal policies, both Mexico and the United States assembled an unofficial but tragically effective immigration regime that functioned in ways familiar to us today—to regulate the admission, exclusion, and removal of persons deemed unfit for inclusion in the body politic.  Sovereign, autonomous groups – such as the Comanches and Apaches – who rejected Mexican and U.S. claims to the territory experienced brutal forms of removal.  Despite their spectacular wielding of political and commercial power in the borderlands, the onslaught of Mexican and American violence, coordinated by the 1870s into a transborder military campaign, whittled away their dominion in the region.  Captured and deported to reservations, if not killed outright, Native peoples became foreigners in their own lands.

The chase after the Apaches, which came to a close with Geronimo’s capture in 1886, quickly morphed into a chase after Chinese immigrants, which became possible following the passage of the U.S. Chinese Exclusion Act in 1882.  (It is no accident that the doctrines of plenary power in the context of immigration and Native Americans developed in tandem, with the Supreme Court’s decisions in U.S. v. Kagama (1886) and Chae Chan Ping v. U.S. (1888) falling within two short years of each other.)  In the turn-of-the-century borderlands, the federal government soon exchanged uniforms; instead of soldiers, customs officers and immigration inspectors – or “men who were hunting for Chinamen,” as some Chinese immigrants called them – now regulated movement across the region.  Tasked with enforcing the Chinese exclusion laws, immigration agents at the U.S.-Mexico border aggressively attempted to make the nation’s anti-immigrant sentiment a reality.

Mexican immigrants as well would soon become targets of anti-immigrant restrictions.  For the most part, Mexicans did not immigrate in any substantial numbers before 1910.  There was a small trickle of Mexican immigration during the late 1800s, closely tied to a booming economy in the American southwest in railroad, mining, and agribusiness and a need for cheap labor by American employers.  This changed dramatically following the start of the Mexican Revolution; fleeing revolutionary violence, political exiles as well as short- and long-term refugees from all cross-sections of Mexican society arrived in droves at the U.S.-Mexico border.  Rejection rates climbed steadily over the course of the revolutionary decade as Mexicans arrived in progressively more impoverished and desperate conditions.  U.S. officials increasingly applied immigration bars against “persons likely to become public charges” to deny admission to Mexicans, especially women.  Immigration officials also worked with public health officials to implement more extensive measures at the international border, systematically subjecting Mexican immigrants to an invasive and humiliating process of being deloused, bathed in kerosene, and examined for physical and mental fitness.  Over the course of the first six months of 1917 alone, officials inspected 871,639 Mexicans for potential exclusion.

Ultimately, it was only the powerful demand for Mexican labor in the U.S. Southwest that kept the border relatively open for Mexican immigrants.  As the famous Dillingham Immigration Commission put it, “In the case of the Mexican, he is less desirable as a citizen than as a laborer.”  It thus seemed to work in the Mexican immigrant’s favor to present himself as a potential laborer as opposed to a political refugee.  As one Arizona immigration inspector explained in 1915, although Mexican immigrants were admissible under the immigration laws, “they cannot be properly termed desirable immigrants.”

By the 1920s, then, fueled by postwar xenophobia and supported by a vocal eugenics movement, the U.S. government had severely tightened the exclusionary policies of its immigration laws, barring not only Chinese immigration but all Asian immigrants, and rendering the “less than white” immigration of Mexicans and southern and eastern Europeans legally suspect. Through its immigration laws and border surveillance, politicians and immigration officials actively reshaped the nation’s racial “destiny,” bringing the laws that regulated race relations at the borders in line with the notions of white supremacy and racial segregation that policed black-white relations within the country.  It should be no surprise today that the politics of immigration restriction go hand-in-hand with the resurgent aspirations of white supremacy.

So yes, despite our extensive history of immigration, the “nation of immigrants” ethos is much more complicated.  The question is, will Americans choose to repeat the mistakes of the past?  And undoubtedly, it was a mistake to restrict immigration based on undemocratic ideas about race, class, gender and sex, and religion.  This is not to say we do not need to reconsider our immigration laws today – reform is seriously needed.  But in advocating for reform, will we replicate the patterns of nativism and prejudice that have marred American history, or learn from these historical moments to push toward a more democratic vision of America?

Dr. Lim’s book, Porous Borders: Multiracial Migrations and the Law in the U.S.-Mexico Borderlands, will be published by the University of North Carolina Press in November, 2017.

[1] President Trump’s support for restricting non-Western immigration is most clearly represented by the largely stalled “Muslim ban” executive orders, his criticism of family-based immigration (which has provided a major avenue for immigration from Asia and Latin America), and his support instead for skills-based immigration.