Dear readers, we’re launching our newest series today: course alerts, where we post information about upcoming classes being offered by early-career professors and graduate students in the coming semester to raise awareness in our scholarly community and reach out to students.

The first course alert is from Dr. Heather Sinclair, who is offering Babies and Border Walls: Linking Reproductive Justice to Immigration Politics in the Past and Present for enrollment at the University of Texas at El Paso this summer.

Linking Reproductive Justice to Immigration Politics in the Past and Present 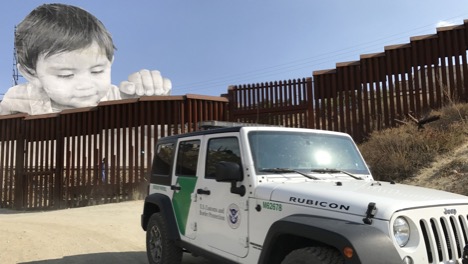 Artwork of French artist JR’s on the US-Mexico border wall.

The Republican Party’s recent proposal to fund the construction of a wall along the US-Mexico border by taking federal monies from Planned Parenthood makes us ponder the connections between population and its control.   From the Page Act of 1875 to mass deportations of Mexicans and Mexican Americans during the Great Depression to more current debates surrounding birthright citizenship and DACA, we can see that discussions of immigration have long centered on struggles over population, reproduction, race, and fitness for citizenship. Using a Reproductive Justice framework, we will explore in this course links between reproductive rights and immigration that stand at the forefront of US culture and politics today, particularly here in Texas and the border region. We will think critically and historically about struggles over reproduction, population and immigration policy, employing race, gender, class, citizenship and sexuality as central categories of analysis. There will be readings, films, and guest lectures on topics that include the sterilization of immigrant mothers, abortion, midwifery and childbirth on the border, eugenics and immigration policy, racial disparities in infant and maternal mortality, LGBTQ issues, transnational adoption and surrogacy, and more.

To submit your own class for a course alert write the blog coordinators.

CFP: Global Environmental Borderlands in the Age of Empire

The William P. Clements Center for Southwest Studies at Southern Methodist University and Stanford University are sponsoring a joint symposium in 2019-2020 to examine environmental and borderlands history from the fifteenth to nineteenth centuries CE. The first meeting will occur at SMU’s Taos, New Mexico campus in late 2019 with a second gathering hosted by Stanford in the spring. A university press will be attached to the symposium to publish the papers presented. The events are being organized by SMU’s Johan Elverskog and Stanford’s Ali Yaycioglu. More from the call for papers:

We welcome papers focusing on mountains, forests, rivers, lakes, swamps, steppes, deserts, seas and oceans, under-seas, subterranean and aerial spaces as environmental borderlands and frontiers of different large-scale (imperial) human organizations. In these undertakings, however, we are particularly interested in contributions with holistic conceptualizations of eco-orders of humans and non-humans, which can challenge established anthropocentric approaches. We do not have any geographical priority. Our concerns are truly global. To this end we plan on bringing together scholars working on the environmental history of borderland regions around the world. We also welcome digital history projects.

The deadline to submit a proposal is 1 October 2018. A 1-page CV and 500-800 proposal abstract should be sent to the organizers. For more information, download the full text of the call by clicking this link (PDF). 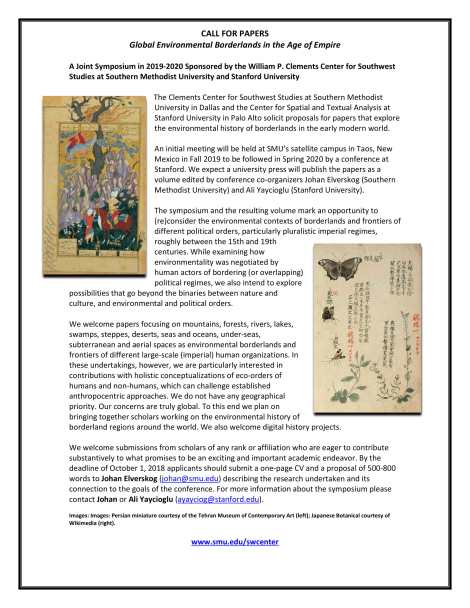