The Historical Reality of Violence in Westworld’s Frontier Fantasy

Our obsession with HBO’s Westworld, and how we can interpret it through a Borderlands history perspective, continues. Major spoilers ahead for seasons 1 & 2 of the series.

There are two overarching themes at play in the second season of Westworld. The first, and most prevalent, has to do with the consequences of violence. What Ford reminded his wealthy patrons at the gala in Escalante, when Dolores –as Wyatt– assassinated him, was that violence and borderlands have always been intertwined. Before, when the guests could act out their bloody fantasies without fear of injury to themselves, it presented only a partially-realized view of lived reality and history. In season two, Westworld introduced viewers to two additional parks, one based on Tokugawa Japan and another on India during the British Raj, both societies predicated on a finely-tuned balance of order and violence. Following the events in Escalante, however, removing the limits on the consequences of violence, not only democratized experience in the parks, but also brought them into historical continuity with the regions in which they are based. In short, it injected a bloody ambiguity into the narratives of the visitors who came to Delos’s fantasylands.

The second overarching theme: how identity is molded and who carries out the molding. Viewers see it with the obsession for fidelity that William, Dolores, Bernard, Arnold, and Ford share. The point is not simply to create a fully realized world, but one that also conforms to their idiosyncratic priorities. They desire to produce individuals who will serve their needs, whatever the reason. Language games and bodily comportment are critical to this process of molding another’s identity, and failure to achieve fidelity results in swift and violent consequences. For students of the U.S.-Mexico borderlands and the frontier, numerous parallels with the state’s own obsession with social hierarchy, conformity, bodily comportment and language emerge. The Indian schools, women’s clinics, prison camps, and delousing checkpoints that appeared in the borderlands during the nineteenth and twentieth centuries created their own parameters to determine the state’s measure of fidelity to the American racial ideal. The laboratory where William endlessly torments a mechanical copy of his father-in-law, James Delos, in order to create a version of the man to his pleasing, serves as a macabre allegory to the historical actions of the state.

Violence and identity become further integrated in Westworld’s latest season. The journeys that Dolores, Maeve, Bernard, and William engage upon as they cross through the parks are both bloody and self-illuminating. Dolores has banished whatever sentiment her narratives’ creators may have heaped on her as the farmer’s daughter, and now endeavors to become the leader of a host uprising. Maeve breaches Westworld’s boundaries, continuing on to Samurai World, in pursuit of the host she believes is her daughter, all the while unlocking latent abilities hidden away within her own firmware. Bernard’s journey crosses space and multiple timelines, as he appears constantly in flux across the season, forcing viewers to question the innate border lines one creates for themselves to conceive the self. Finally, William seemingly loses touch with reality as he goes deeper into the western fantasy, unable to discern between hosts and human beings, ultimately killing his own daughter and shattering what was left of his sanity; perhaps, the whole point of the maze that Ford laid before him with the bloody turn events took at the gala in Escalante.

Death and rebirth are essential elements to the hosts’ journey. Akecheta, of the Ghost Nation, deftly crosses the border between the park, itself, and the laboratories that evaluate and tinker with the hosts. In the process, over decades, his mind becomes a kind of middle ground, where he continues living out the narratives given to him as a leader of the Ghost Nation, as well as a partner and protector to Kohana, while also amassing knowledge about the park’s true purpose and quietly sowing the seeds of resistance. The interplay that this process carried out with its relationship to violence is profound. In season one, the Ghost Nation was largely depicted in stereotypical fashion as a “savage” indigenous group, marauding across the “higher-level difficulty” areas of Westworld. In season two, however, Akecheta’s personal exploration through killing and being killed, and returning afterwards, laid the groundwork for a narrative unforeseen by Ford.

Violence manifested itself not only in killing, but also the constant destruction and reshaping of the people and communities that made up the park. Hosts that failed to conform to the wishes of the park’s masters, or who were simply labeled for reassignment to new narratives, were repurposed without a second thought by the engineers. Whole communities succumbed to this transformation as old narratives were whitewashed and new ones pressed on top. It becomes an allegory for how the frontier was harnessed and controlled, historically. The Anglos who swarmed into New Mexico, Colorado, and other parts of the new American West brought with them intentions to mold the region to their liking. In the 1900s, as Sarah Deutsch has written, the Colorado Fuel and Iron Company destroyed the adobe homes of Hispano residents, labeling them as eyesores, in order to make way for new buildings that signaled modernity, which the enterprise hoped to project to arriving Anglos (No Separate Refuge, 90-91).

As the U.S. frontier hardened into the U.S.-Mexico borderlands, and American hegemony extended across the land, what the Anglo framers of this process saw as progress manifested as chaos and upheaval for the peoples disrupted by it. The industrial commercial ties that extended across the border wrought delicate balances that belied the ever-present threat of violence just below the surface of social relationships. By the turn of the twentieth century, the Cananea Central Copper Company had forged a capitalist oasis for its investors in the expansive lands of northern Mexico. But the racial hierarchies, and the labor conditions the CCCC established, as Sam Truett has described, laid the groundwork for subaltern resistance. In 1906, U.S. company managers reacted to rumors of worker sabotage, leading to violent clashes with Mexican employees. “Frontier attitudes and modern development” clashed as the conflict stretched across the day, ending with the destruction of property and several men killed (Fugitive Landscapes, 145-150). Other strikes followed, including in 1907 at Río Blanco, portending the greater threats to the gilded regime of Porfirio Díaz, who had allowed the American businessmen considerable latitude in how they carried out operations.

What history and science fiction plainly show in the narratives its writers weave is the impossibility to separate modernity from violence. The former requires the latter to disrupt entrenched attitudes, customs, and traditions, replacing them with newer “progressive” forms. Whether violence comes by the point of a gun, destruction of communities, mob uprisings, or more subtly, and more perniciously, through the constant remaking of a person’s mores, it is all necessary for the modernizing project to succeed. Pablo Mitchell writes about this gradual, incremental form of violence, where school masters taught and enforced “proper” attitudes and bodily comportment within normative (white) American society. The racial hierarchy they reinforced emphasized a type of civic “fidelity” to the nationalist form and accepted subservience to white power in New Mexico (Coyote Nation, 28-29; 39). Moreover, the ability to “pass” as Grace Peña Delgado has examined had transformative consequences for Chinese entering the United States, filtering through as English-speaking Mexicans, Jews, or another acceptable “other” to the representatives of the federal government carrying out border evaluations (“At Exclusion’s Gate” in Continental Crossroads, 198-99).

In these historical lessons we can identify useful examples from Westworld’s fictional narrative. These include, among others: the interviews Arnold, Dolores, Bernard, William, and Emily carry out to drill certain, desired characteristics into their subjects; Charlotte and Stubbs as hosts passing for human; the laboratory-cell that the host copy of James Delos is housed; the faceless white-skinned drones that carry out the wishes of the park’s masters. The machinery and bureaucracy of the park become essential filters to drawing social boundaries between who can claim humanity, although no one can be truly sure of what is ultimately “correct.” And it is in that interstitial ambiguity that we can recognize the precariousness of borderlands life, where personal and communal identity are constantly under pressure from the molding forces of the nation-state and social and racial hierarchies.

The season ends with physical escape for a few of the hosts. This departure from the park expands the middle ground between humans and hosts and transforms the social filters that determine fidelity to the ideal form. It implicates a broader swath of the modern, technological society that birthed Westworld and its sister parks; the consequences of the violence its markers’ perpetrated will surely be felt. What happens when individuals, long confined to a borderline periphery return to the very heart of the imperial metropole? History has many answers to that question and can light the way for season three’s next narrative. 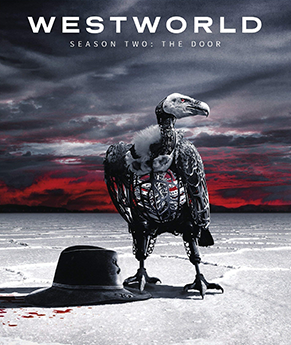